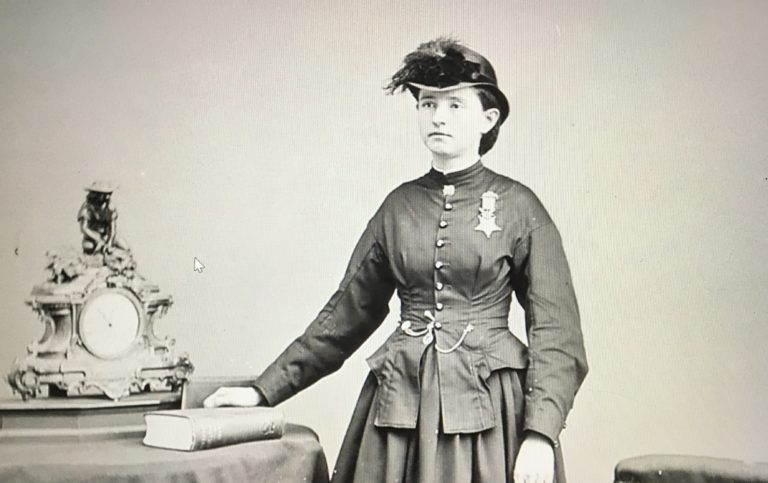 Mary Edwards Walker was the first female surgeon and the second female doctor in the United States as well as the only woman to have been awarded The Congressional Medal Of Honor.

Born in the Town of Oswego, New York, on November 26, 1832, to Alvah and Vesta Whitcomb Walker she had four older sisters Vesta, Aurora, Luna and Cynthia, and a younger brother, Alvah Jr..

Her abolitionist parents believed strongly in equal rights and equal education for all humans. The family farm was a stop on the Underground Railroad. They educated their children in a schoolhouse built on their land.  Mary and two of her sisters went on to attend the Falley Seminary in Fulton, New York.

During her adolescence, Mary showed a keen interest in her father’s medical books, and was impassioned to pursue medicine as a career.  After graduating from the Falley Seminary, Mary taught school in Minetto, NY to earn enough money to pay her way through Syracuse Medical College, one of the few medical school in the United States to accept women.  She was the only woman in her class, graduating and receiving her medical degree in June, 1855.

Alvah thought that women’s fashions of the day were too constrictive, even unhealthy. Mary agreed and adopted a style of wearing a frock coat over trousers, feeling that this style of clothing, called the Reformed Style, was less restrictive and more sanitary, as the long dresses of the day dragged their hems in the streets and the fields splattering dirt up inside of the dress.

Mary dressed in a modified officer’s uniform, because of the demands of traveling with the soldiers and working in the field hospitals, but kept her hair long to highlight her identity as a woman.

In 1856, she married a fellow medical school student, Albert Miller.  During the wedding, she wore her Reformed style clothing, omitted ‘obey’ from her vows, and did not take his name. They set up a joint practice in Rome, New York which foundered as the public was not ready to accept a female doctor.  Her marriage to Albert also foundered, with him having several extramarital affairs.  In an age where it was not common for women to divorce their husband, Mary divorced Albert.  At that time, she wrote many essays for the magazine Sybil on women’s rights and the unfair treatment of women by men.

Denied because of GENDER!

In July 1861, after the Battle of Bull Run, Mary went to Washington, DC, to join the army as a medical officer. Her enlistment was denied because she was a woman.  Undaunted, she volunteered as a surgeon at the hospital that had been set up in the US Patent Office. Her superior, Dr. J.N. Green, recommended that she be commissioned, but that idea was rejected because of her gender.

In the winter of 1864, after two and a half years of pursuing a commission,  Mary was finally appointed assistant civilian surgeon, becoming the first female surgeon in the United States Army, as well as the United States. She was assigned to the 52nd Ohio Infantry based in Chattanooga, Tennessee and near the Union front lines after the Battle of Chickamauga. 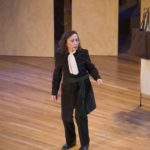 On the Battlefield and POW

During and after the Battle of Fredricksburg in December 1862, Dr. Mary Edwards Walker worked as a Civil War surgeon near the Union front lines, treating soldiers in field hospitals. She increased the survival rate by advising stretcher bearers to carry wounded soldiers downhill with the head above the feet.  She also witnessed many avoidable amputations, which carried a high mortality rate.  Again, saving soldiers’ lives, if she thought that an amputation was unnecessary, she would counsel soldiers to refuse that operation.

Being at the front lines, Dr. Walker saw the sufferings on both sides of the war and would ride across enemy lines to help Confederate soldiers and civilians, as well as her beloved Union soldiers, stating that her job was to heal.  On April 10, 1864, Dr. Walker took the wrong road while on an expedition into Confederate territory to visit patients and encountered enemy guards.  She was taken into custody, and was imprisoned in the brutal Castle Thunder in Richmond, Virginia. It was here where her eyesight became impaired due to terrible rations and brutal treatment. Never being silent when there was injustice, Mary complained about the lack of grain and vegetables for the prisoners, and the Confederates added wheat bread and cabbage to the rations.  One Confederate officer declared “that lady doctor has enough tongue for a regiment of men”.

After recuperating from her stay in ‘Hotel de Castle Thunder’ she was ready to return to work as assistant contract surgeon in the Union Army.  Again, even after having proven herself as an army surgeon, she had to fight for a commission because of her gender.  In October 1864, Mary was finally again commissioned as acting assistant surgeon, remaining in that position until the end of the war and discharged on June 15, 1865. 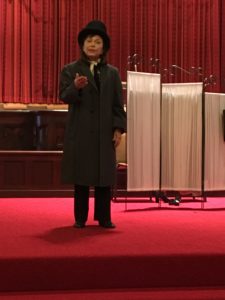 After the war, Mary Edwards Walker became a writer and lecturer, touring the United States and Europe on women’s rights, dress reform and health issues. In 1866, she was elected president of the National Dress Reform Association. She began to dress completely in men’s clothing, from top hat and bow tie to pants and shoes. She was arrested several times for ‘impersonating a man.’

Mary on Suffrage – Arrested for voting!

In September 1866, Mary helped Susan B. Anthony and Lucy Stone organize the Women’s Suffrage Association of Ohio.
Mary Walker worked for equal rights for women in all facets of life, from marriage to the workplace, including divorce law reform, on behalf of women and authored two books “Hit” and “Unmasked or the Science of Immorality” devoted to her views on female equality.

Mary Walker was estranged from other pioneers of the women’s movement over the idea of a constitutional amendment giving women the right to vote. She stubbornly maintained that the “We, the People” of the Constitution included women, and that to allow men to vote on the rights of women was an “unconstitutional usurpation of power.”  She went to vote at the polls several times as a ‘citizen’ and was restricted from voting and arrested.

They tried to take her medal away from her (what were they thinking!)

After the criteria for awarding The Medal of Honor was revised in 1917 to include only those who engaged in “actual combat with an enemy”, Dr. Walker’s medal was revoked along with over 900 other Medal of Honor recipients.  When she was asked to return it, Dr. Walker refused and continued to wear the medal every day of her life.  A relative told the New York Times, “Dr. Mary lost the medal simply because she was a hundred years ahead of her time and no one could stomach it.”

On June 10, 1977, the Army Board of Corrections restored her Medal of Honor, citing her for “distinguished gallantry, self-sacrifice, patriotism, dedication and unflinching loyalty to her country”.

Dr. Mary Edwards Walker died on February 21, 1919 in her beloved Oswego Town.  On Dr. Mary’s passing, Dr. Bertha Van Hoosen, the founder of the American Medical Women’s Association said, “Dr. Mary’s life should stand out to remind us that when people do not think as we do, do not dress as we do, and do not live as we do, that they are more than likely to be half a century ahead of their time, and that we should have for them not ridicule but reverence.”

USPS honors Mary with a stamp

In 1982, a 20-cent stamp was issued in Dr. Walker’s honor commemorating the 150th Anniversary of her birth.

In 2000, Mary Edwards Walker was inducted into the Women’s Hall of Fame at Seneca Falls, New York.

Special thank you to: