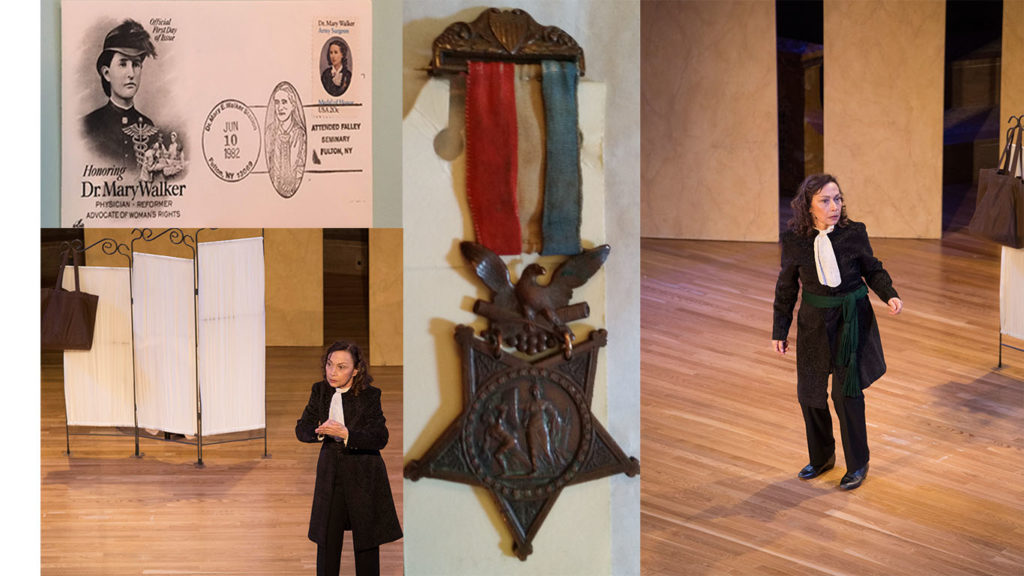 One day Lloyd J. Schwartz  (Writer/Director) read a one page article on Dr. Mary Walker, Civil War surgeon and the only woman to be awarded the Congressional Medal of Honor. Yet he had never heard of her. Normally adverse to one-person plays,  Schwartz couldn’t shake the idea that Dr. Walker’s life was dramatic, intense, pertinent and could captivate an audience.

INDEPENDENCE had its world premiere fittingly in Seneca Falls, New York (the birthplace of the women’s movement), as part of the 100th Anniversary Celebration of women getting the right to vote in New York.

THE ONLY WOMAN TO BE AWARDED OUR COUNTRY’S HIGHEST HONOR:  THE CONGRESSIONAL MEDAL OF HONOR

KATHIE BARNES (Performer — Dr. Mary Walker) has enjoyed a wide variety of roles in film, television and even digital having been a series regular in Warner Brothers first online series DECEPTION. Other favorite roles include a semi-regular role on ABC’s “All My Children”, Laura in “The Guiding Light” and Nona in the film “Jimmi”. She previously worked with author/director Lloyd Schwartz on two of her favorite theatrical roles, “What Are We Going to Say to Her?” and the poignant “Poems for Mary.”

Though a prolific writer/producer in TV and Film (Brady Bunch, Gilligan’s Island, Alice, Baywatch), Lloyd is proudest of his accomplishments in theatre. He has had 34 plays produced, and has garnered 16 Valley Theatre League awards.

In 2017, in Seneca Falls, New York, Lloyd directed the world premiere of “Independence,” a play he has written about Dr. Mary Walker, an important figure in the women’s movement.  This presentation was part of the celebration of the 100th anniversary of women getting the right to vote in New York.  “Independence” had a production at Princeton University, and will soon be playing on a college circuit.

Once completing her degree in Women’s and Gender Studies at The College of New Jersey she pursues her passion in bringing untold stories of the many women who have marched before us and for us.  As Producer, Tina contacts venues, Universities and theaters, creates bookings, negotiates contracts, and gives cues in the booth. For INDEPENDENCE, she also spearheads and books outreach workshops in association with performances, as well as she and Kathie guest lecturing in classes on Women’s Studies.

"I don't see plays very often, and I wasn't sure what to expect from a one-person performance. But I was impressed with how much energy and emotion Kathie Barnes delivered, and the entire play was quite entertaining beginning to end. INDEPENDENCE not only tells the story of Dr. Mary Walker, but gives us a rarely-seen glimpse of American society in the Civil War era from the point of view of a woman, and illustrates how Dr. Walker's career, very impressive by any standards, is especially unique and noteworthy given the contemporary views of women in medicine and in war. I would absolutely recommend INDEPENDENCE to anyone looking for an informative (and funny!) show."
Logan
UPENN Graduate Student
"This play was inspiring to me in that it brought alive the humanity of an historical figure. Dr. Walker had a woman's heart, albeit broken by her cheating husband, and a heroine's grit unspoiled by politics or social pressure to conform. The fact that she thumbed her nose at the military for wanting to rescind her medal of honor was further proof of her strong sense of conviction. I think students of history should see this play just to learn about an ignored figure of the War Between the States."
MZ
Audience Member
"For far too long, the story of Dr. Mary Walker has not been told. A heroic surgeon and dress reformer, Dr. Mary Walker fought adamantly for her beliefs, which is something we can all aspire to today."
Christy
Princeton University Graduate Student
"My wife and I both enjoyed the play and feel that we learned some interesting history. We’d not heard of Dr Walker before, and our experience will encourage us to discover other examples of women pioneering in traditionally male roles. There are indeed many more such stories to be told."
PH
Professor, Princeton University
Click here for more testimonials
Close Menu